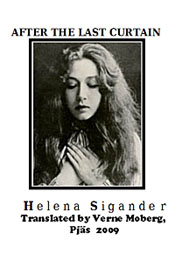 Waiting at St. Peter’s Gate, actress Harriet Bosse looks back on her life with Sweden’s acclaimed playwright.
The time and place is ”after death” opposite the entrance to St. Peter’s gate. Harriet Bosse is preparing their defence. Memories from life appear…

There will be one intermission between Acts One and Two.

THE TRANSLATOR VERNE MOBERG has worked in publishing and taught language and literature at various universities. Shehas translated works by many Swedish authors and has also translated from Danish, Norwegian, and German. She co-produced the Nordic Theater Festival at Columbia in 1995, a commemorative program at Deutsches Haus for Victoria Benedictsson in 2000, and a memorial tribute to the distinguished translator Leif Sjöberg at New York’s Scandinavia House in 2002. Dr. Moberg was awarded the Inger Sjöberg  Translation Prize in 1997 by the American-Scandinavian Foundation and received a prize from the Swedish Academy in 2000. In fall 2009 she will teach a Columbia course entitled “Sex and Gender in Scandinavian Literature.” She has a BA from the University of Illinois (Urbana-Champaign), an MÅ from SUNY/Stony Brook, and a PhD from the University of Wisconsin-Madison.

MARY KEEFE (Harriet Bosse) recently appeared as Edwina Williams in Tennessee Williams: The Artist and His World, for Accidental Rep. She has a long affiliation and created numerous roles in new play  productions at The Puerto Rican Traveling Theatre Professional Playwrights, and plays in NYC library  projects for Around The Block/Al Doblar La Esquina. For the Columbia Swedish Program she appeared in  staged readings at Deutsches Haus and recorded lead roles for the Scandinavia Off Broadway CD series:  as Alva Myrdal in Alva & Gunnar: 91 Days in the Long- Distance Relationship of the Myrdals… (Hans  Hederberg), Agnete in Agnete (Amalie Skram), and Krista in All the Days, All the Nights (Margareta  Garpe). She is an adjunct professor of acting at Nassau Community College and an alumna of the  Program in Educational Theatre at NYU. AEA, AFTRA, SAG.

ROBER MEKSIN (August Strindberg) is pleased to return to Columbia University’s Deutsches Haus  readings, where he has performed on several occasions. Other credits include: Off- Broadway–The  Canterville Ghost; Off-Off-Broadway performances–Strindberg NY Festival, Riverside Shakespeare, and  Vital Theatre Company; regional theater work–Great Lakes Theatre Festival, The Cleveland Playhouse,  Playwrights Theatre of NJ, and The Levin Theater Company; performance workshops with Playwrights  Horizons and Ensemble Studio Theatre; numerous performances with Hudson River Classics and the Instant Shakespeare Company; touring nationally with Boston Chamber Repertory; and featured  performances in several independent film productions. He is a member of the New Jersey Repertory Company and sings with the NYC choral group, The Glass Menagerie. He received an MFA from Rutgers University, under the teaching of William Esper. AEA, SAG.